Young people (aged 11-15) from the Brite Centre in Braunstone

Working on the Stage 1 of the Project: participating in sound recording and oral history workshops, conducting interviews with friends and family

A Funny City is a Heritage Lottery Funded Project working with young people to research and archive the history of comedy in Leicester since 1979.

Anna Peavitt, from Big Difference Company, started the project with 2 groups. The first group were 11-15 year olds from the Brite Centre in Braunstone. They worked on learning how to record interviews and investigated the notion of Leicester Humour. They interviewed local comedians and friends and family. Alongside them an older group from De Montfort University learnt how to research at the Leicestershire, Leicester and Rutland Records Office, and started collecting quirky facts about comedy in Leicester. They started exploring how to build the website which would contain the archive, and began looking for artefacts used from over the years at Leicester Comedy Festival. Meanwhile another group from DMU were working with video maker Keith Allot to interview comedy promoters, writers and comedians in the city about the wider comedy scene. 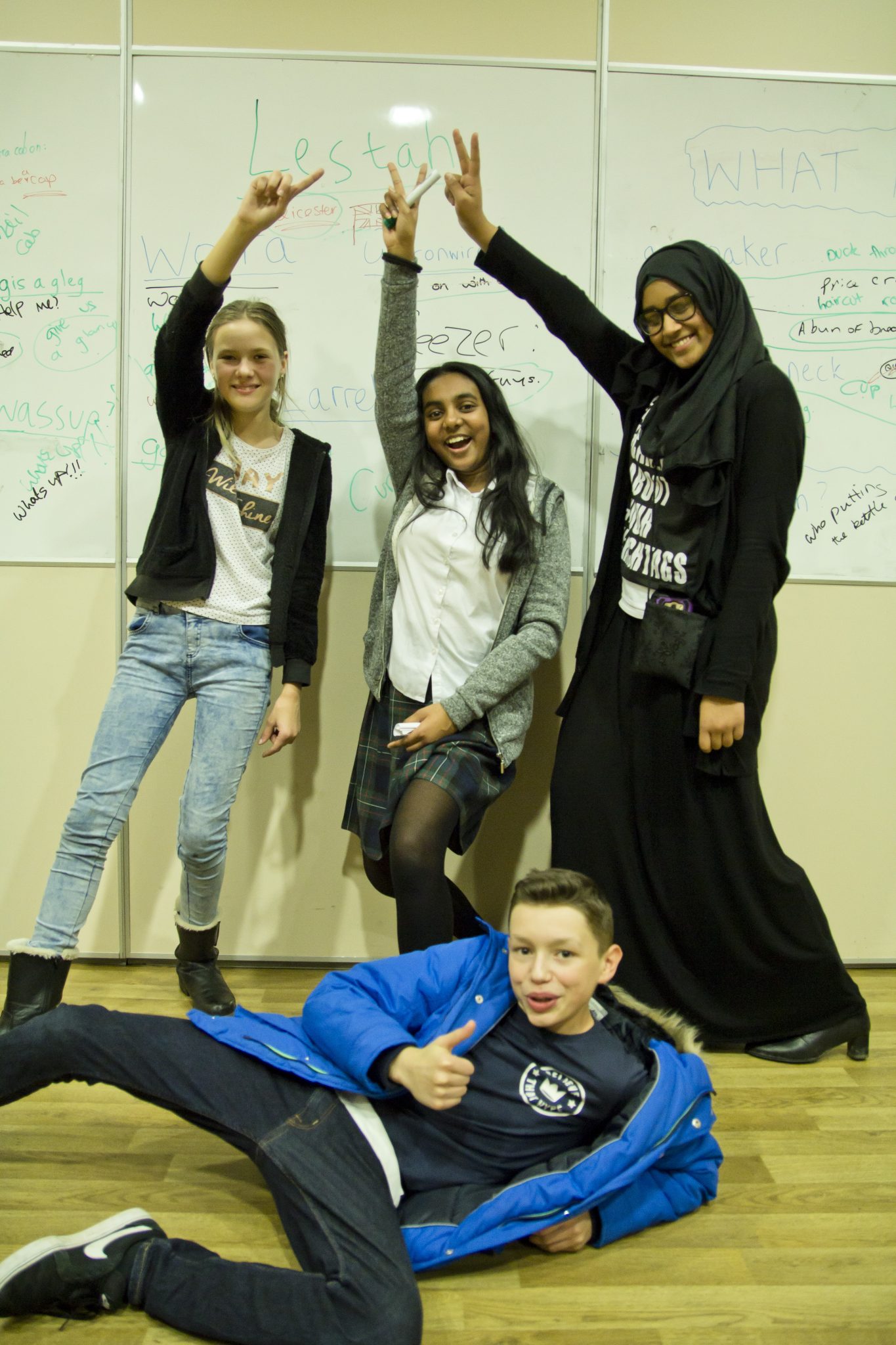 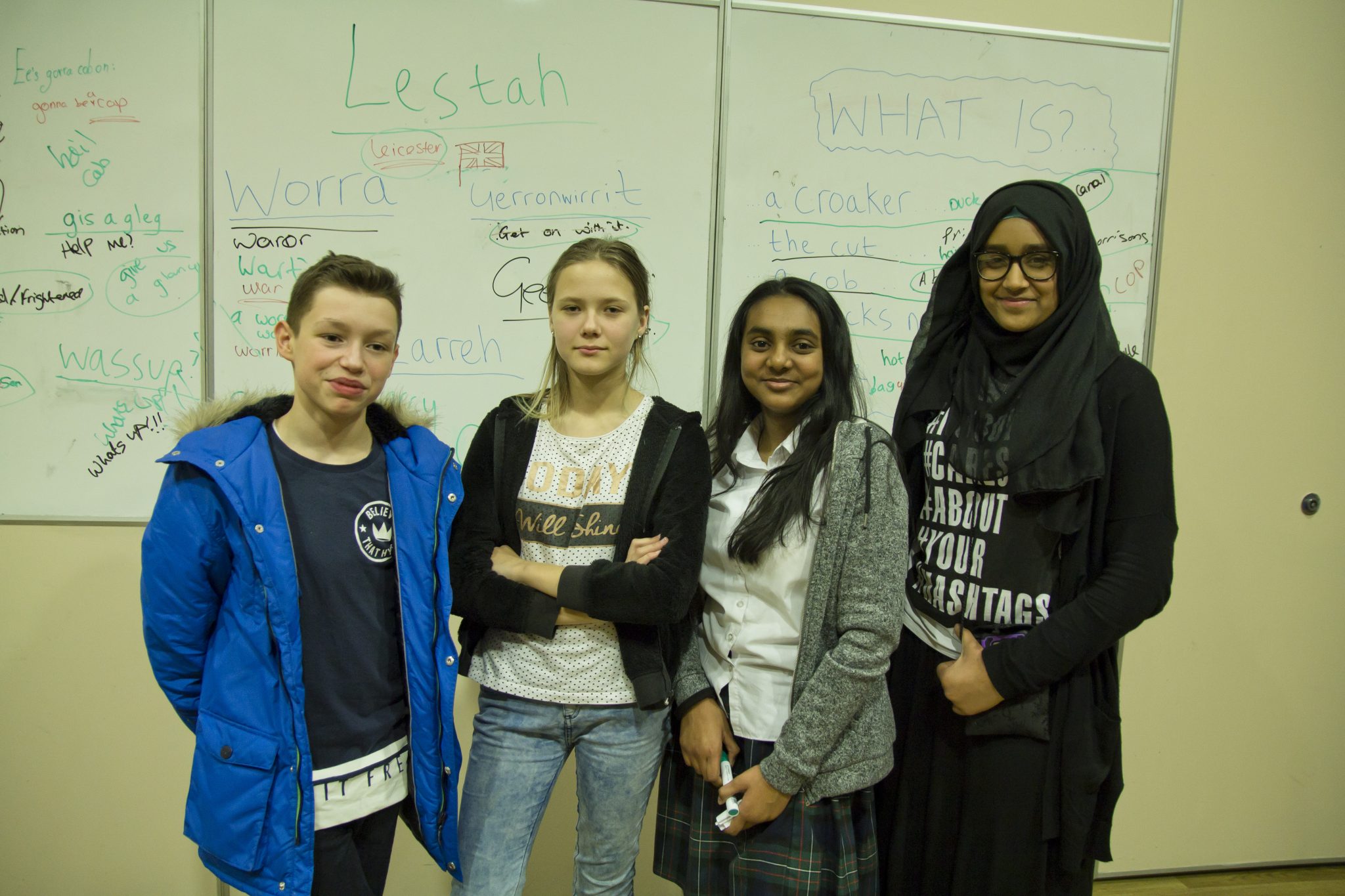 These are their ideas on the Project 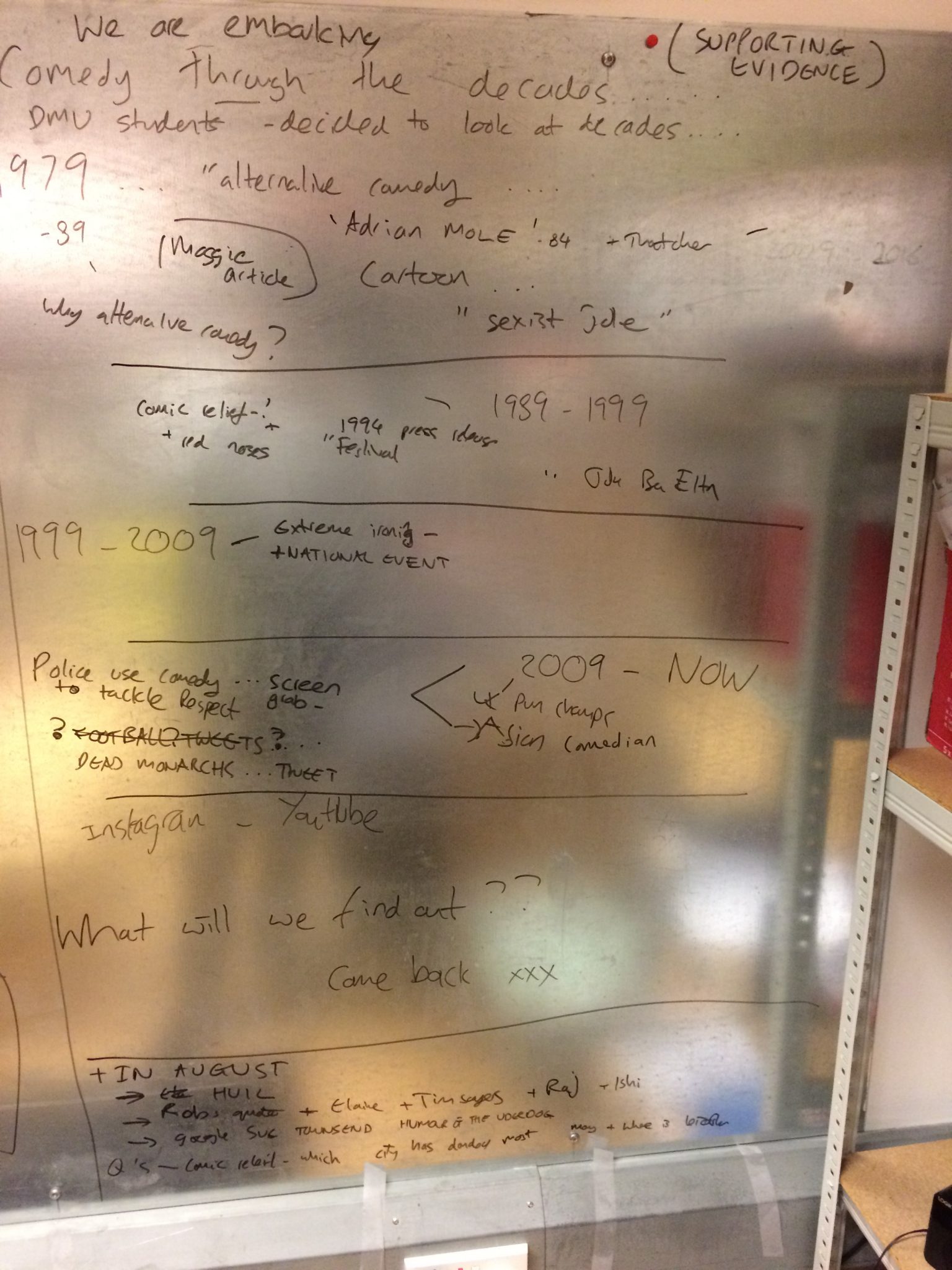 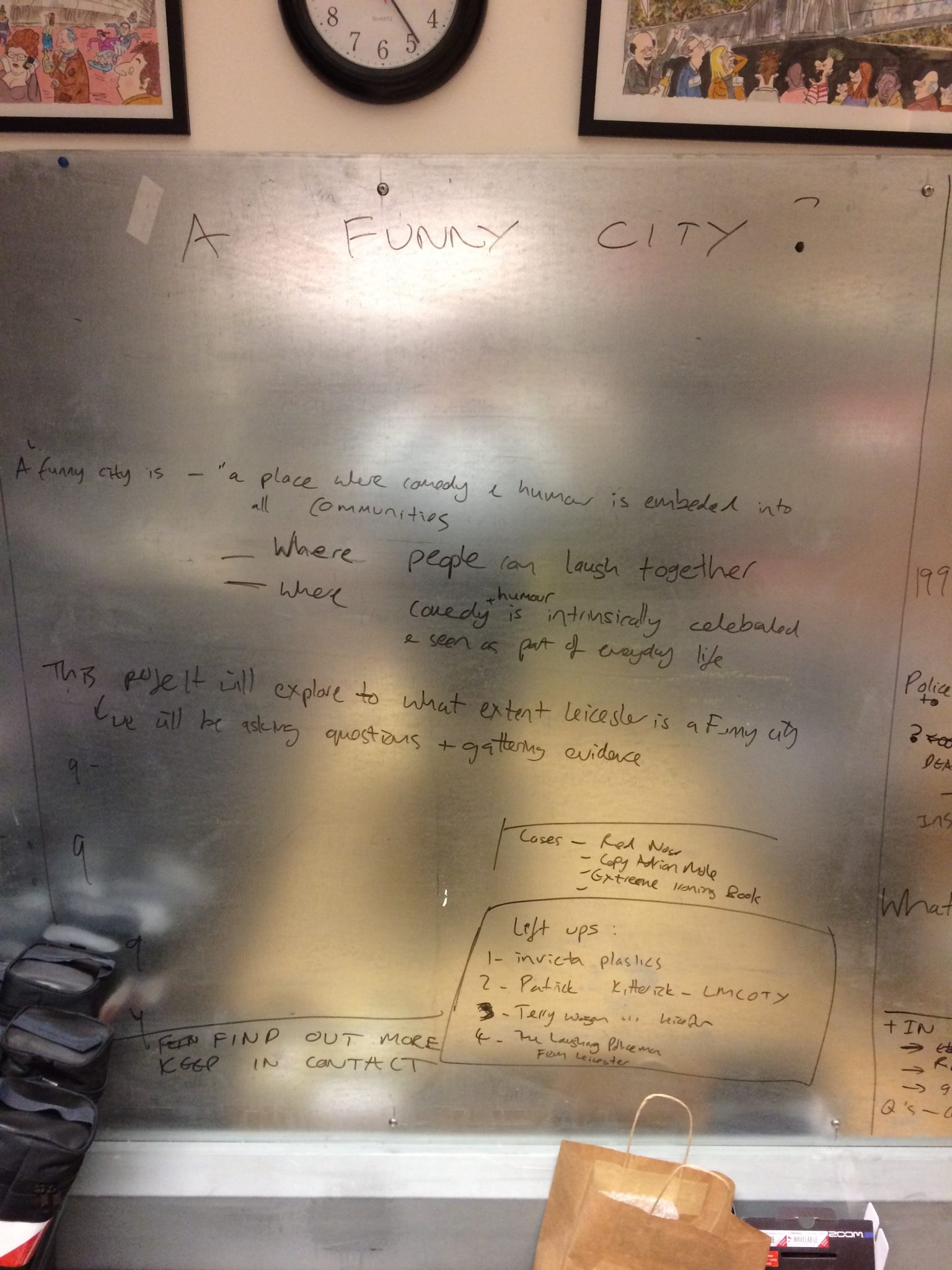 In August 2017, after a break of 3 months due to staff changes at Big Difference  Company, the new project manager Liz Soden, began working with the STart Group who meet weekly at Soft Touch Arts to develop life, creative and social skills. These are young people aged 16-25 who are experiencing various challenges in their life. After a number of attendances and talks with the whole group, it ended up with 3 young people becoming the most involved. They attended Leicester Comedy Festival’s Pick of the Fest night and interviewed the first UK Pun champion Darren Walsh.

The follow on from this was great motivation to get more involved in the project and they started going through boxes stored in the Comedy Festival office to unearth some incredible material. They found old videotapes on a variety of now defunct formats, which DMU video department helped us digitise from VHS. A lot of this material would have been lost forever. One of the highlights, which created great mirth, was unearthing a recording of Cable 7 ‘s interview with a fresh-faced Leicester Comedy Festival organiser called Geoff Rowe in 1995. We also found a video in an unrecognisable format entitled Terry Jones and Michael Palin – life of Graham from 1998. Luckily the technicians at DMU came up trumps by digging out some old equipment and cameras and blowing the dust off them, in order to play and digitise them. This ended up being great quality and again includes priceless material; memories from them both about their friend Graham Chapman, which could have been lost forever.

At Soft Touch we also spent a day transferring material from a number of mini DV tapes using an old camera and found amateur footage of a 2003 procession through the City Centre called Runga Rung, featuring a huge mechanical Elephant roaming along unpedestrianised roads.

In terms of printed material, we sourced via the internet, some old posters going back to the late 80’s from early comedy clubs. We also had a large number donated by Kev F Sutherland. Again we returned to the cardboard boxes in the comedy festival offices and unearthed old posters and photos going back to the first comedy festival in 1994.This was done by Carl and James, volunteers from Soft Touch.

The job of scanning and trimming these and cataloguing them into date order was in most part done by a volunteer called Carl Tincknell from the STart group. Not only that, but he meticulously resized the images for use on the website. The next job was to produce collages of key images from each decade, 80’s, 90’s 00’s and 10’s and these were printed onto foam board for the exhibition.

The breadth of material, when you combine the historical videos, videos of community comedy, old stills and posters, and sound recorded interviews, really delves into the heritage and humour of Leicester.

Due to the amount of material the website had to rebuilt as a bespoke functional site with a server which wouldn’t crash or go slow.

The younger group did the design of the FUNNY CITY logo. All the branding in terms of colours / fonts and layout was built on what the DMU students had done by the Start group project volunteers working with graphic designer Jim Jackson.

They also worked with the exhibition designer Vince Attwood on ideas for a frame for the portable pop-up exhibition. As it had to be portable it was decided to weld together a metal structure, which comprised 3 off kilter oblongs on top of each other on each side with a strip across the top to form a frame around a small stage. This slots together in bits. It was welded together by a local blacksmith. The stage has a red curtain and a stand up mic with a light shining on it, to represent a comedy club.

Within the structure they built in a monitor on either side. From all the hours of video footage 2 highlights videos illustrating all the facts that were researched and uncovered about key milestones in the Leicester’s story of Comedy were compliled and edited. They are each 11 mins long and the first depicts the 80’s and 90’s whilst the second depicts the 00’s and 10’s. The whole of the catalogued archive will be housed with the Leicester, Leicestershire and Rutland records office both digitised material on a hardrive, as well as the original printed material. It will also be housed digitally with East Midlands oral history archive at University of Leicester. 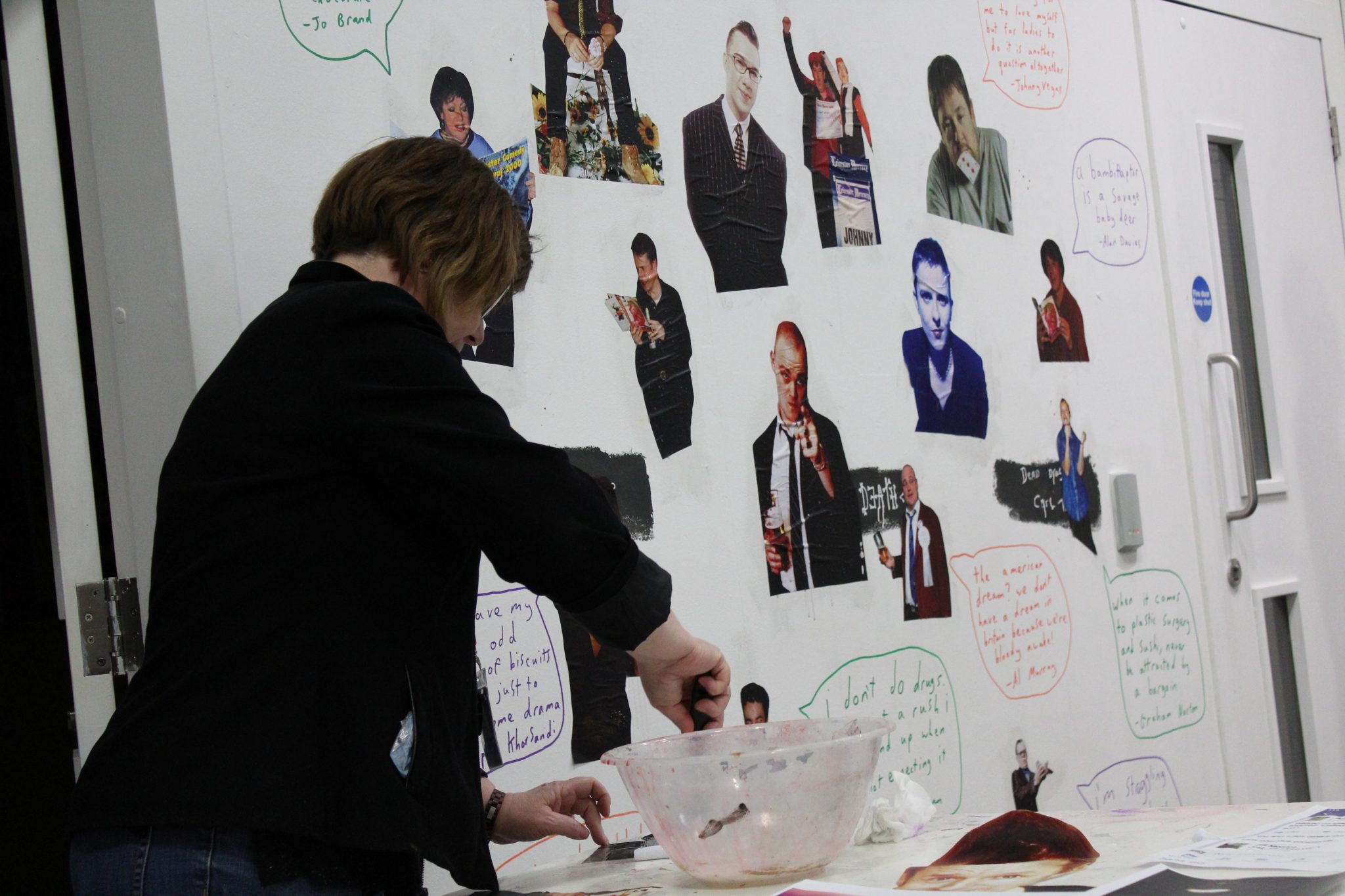 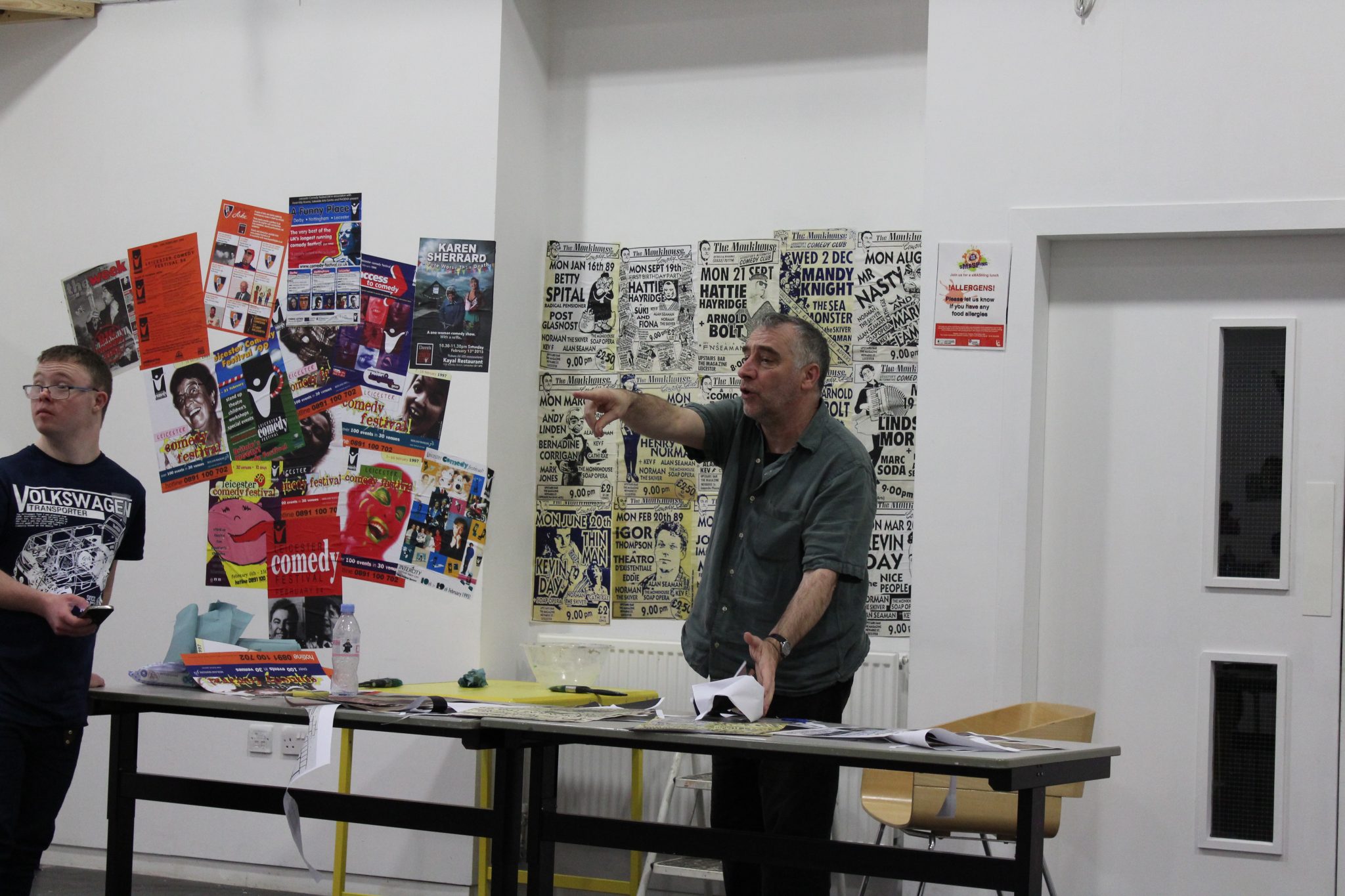 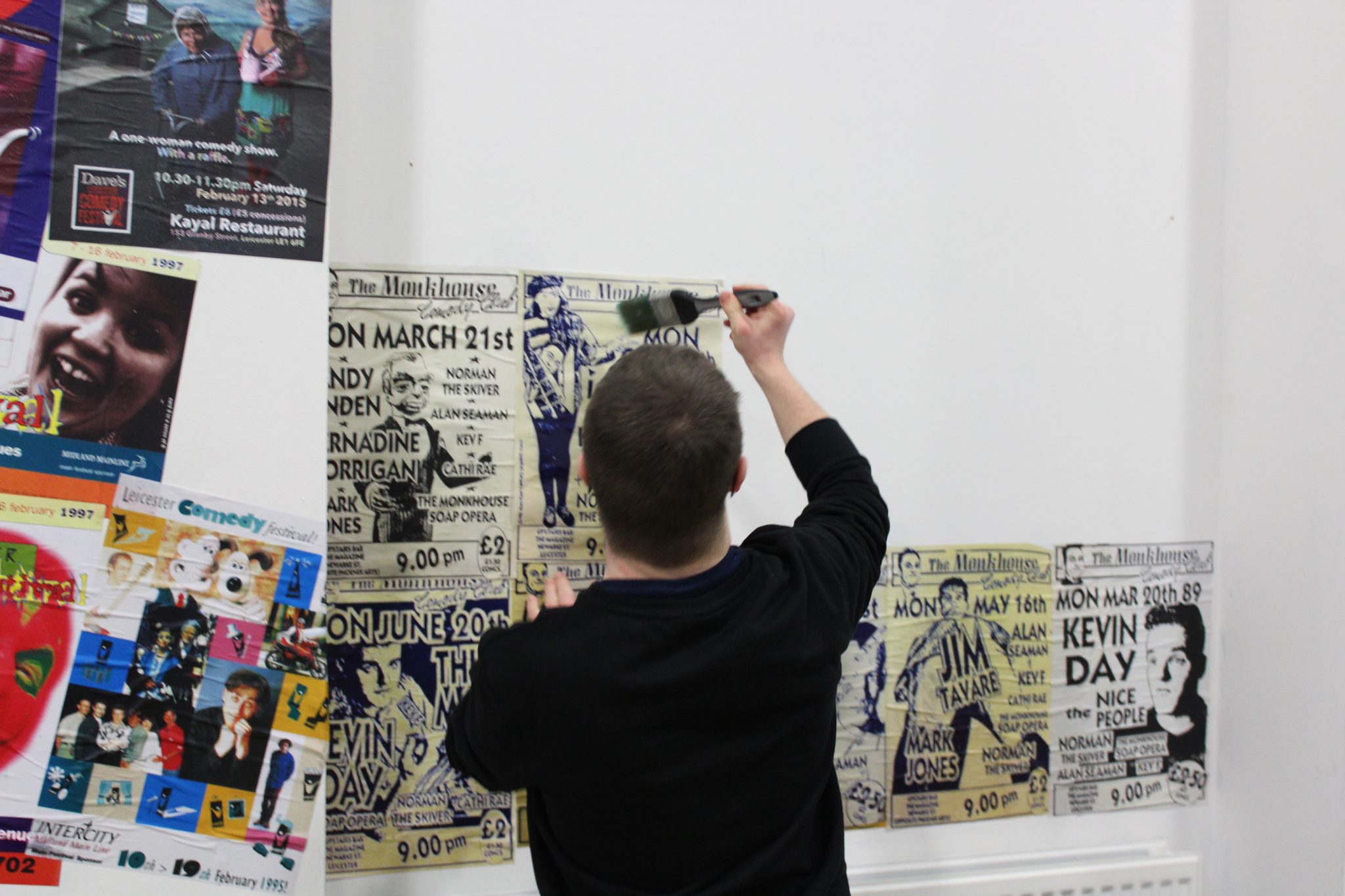 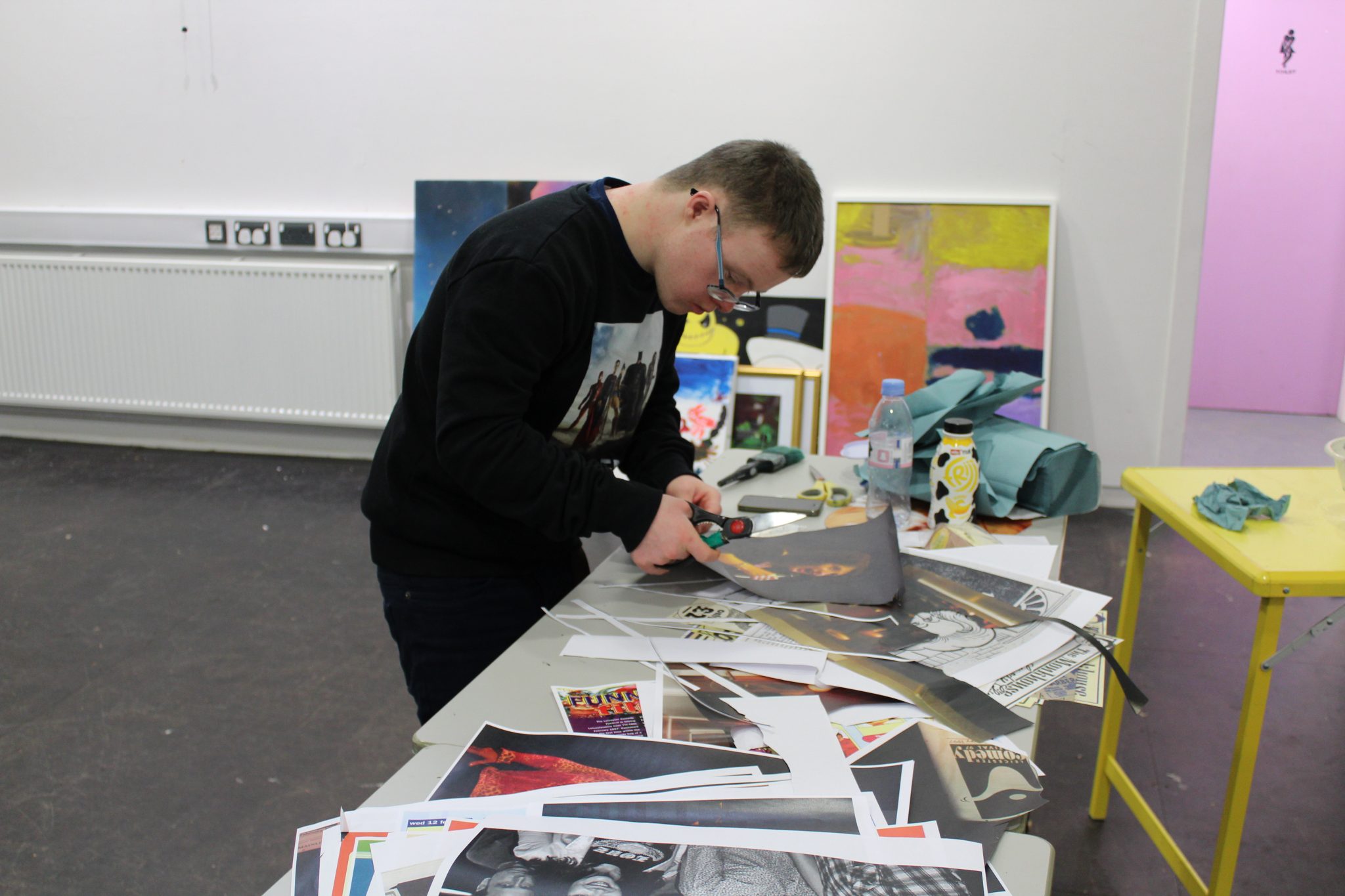 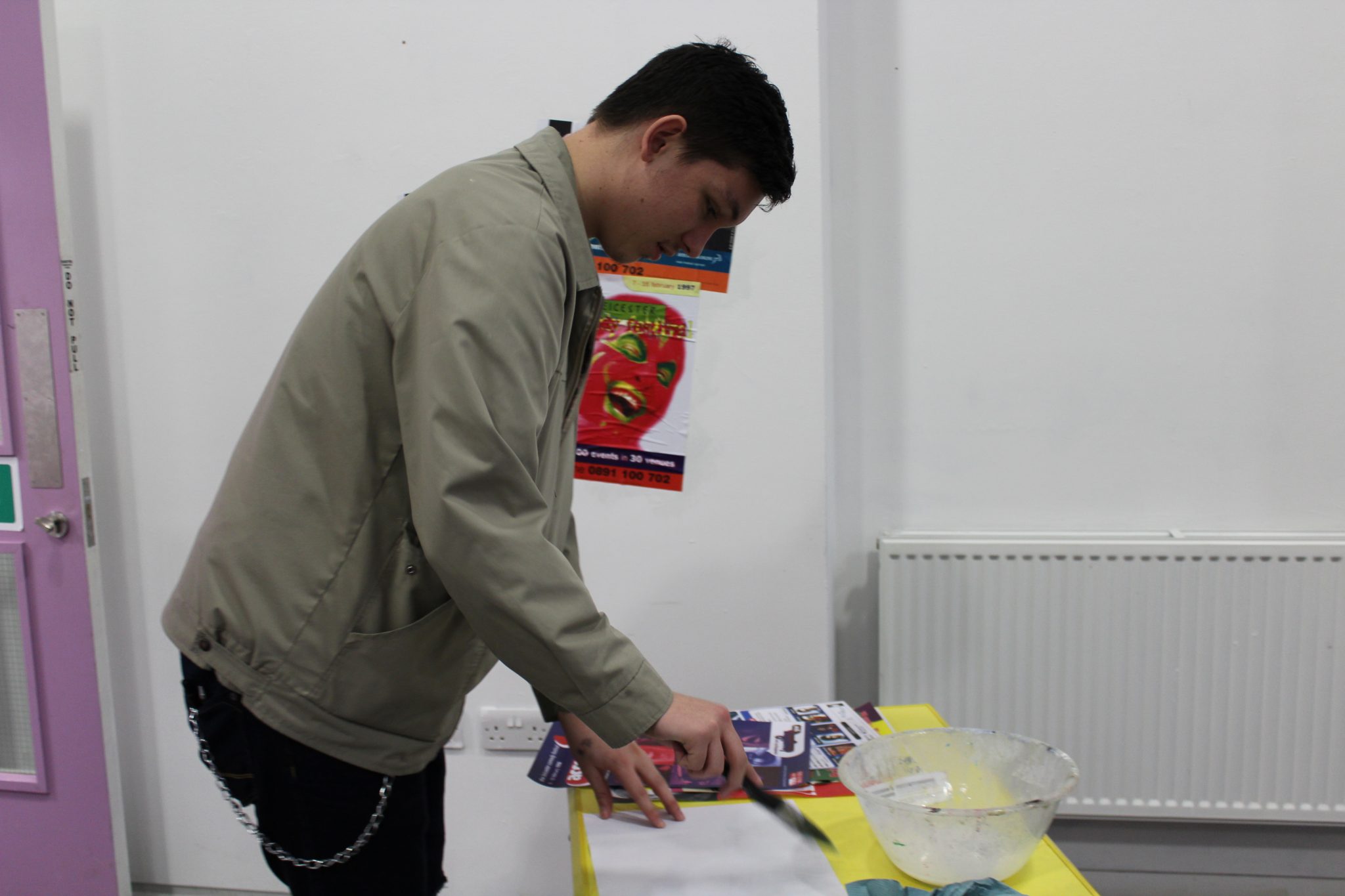 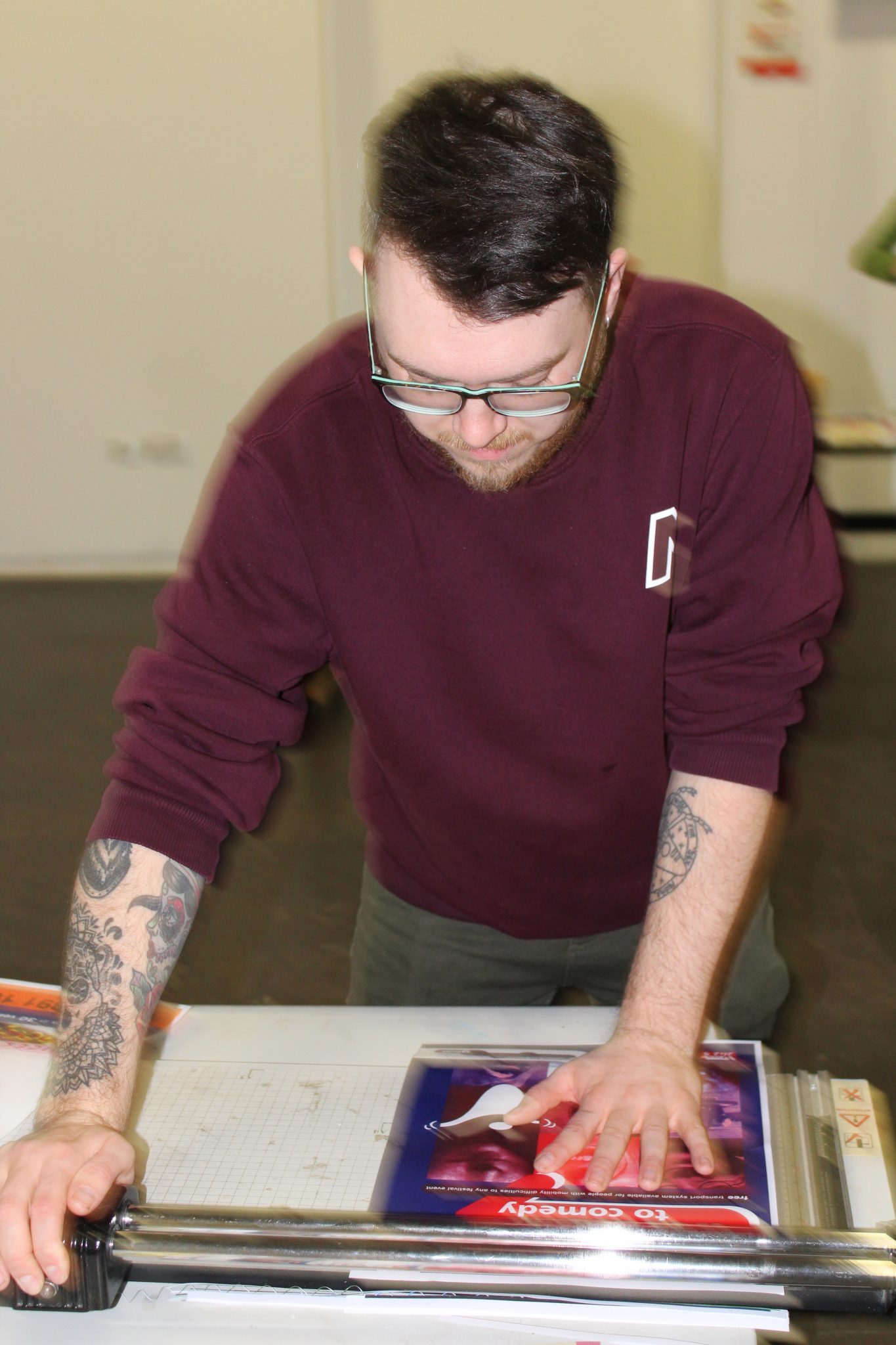 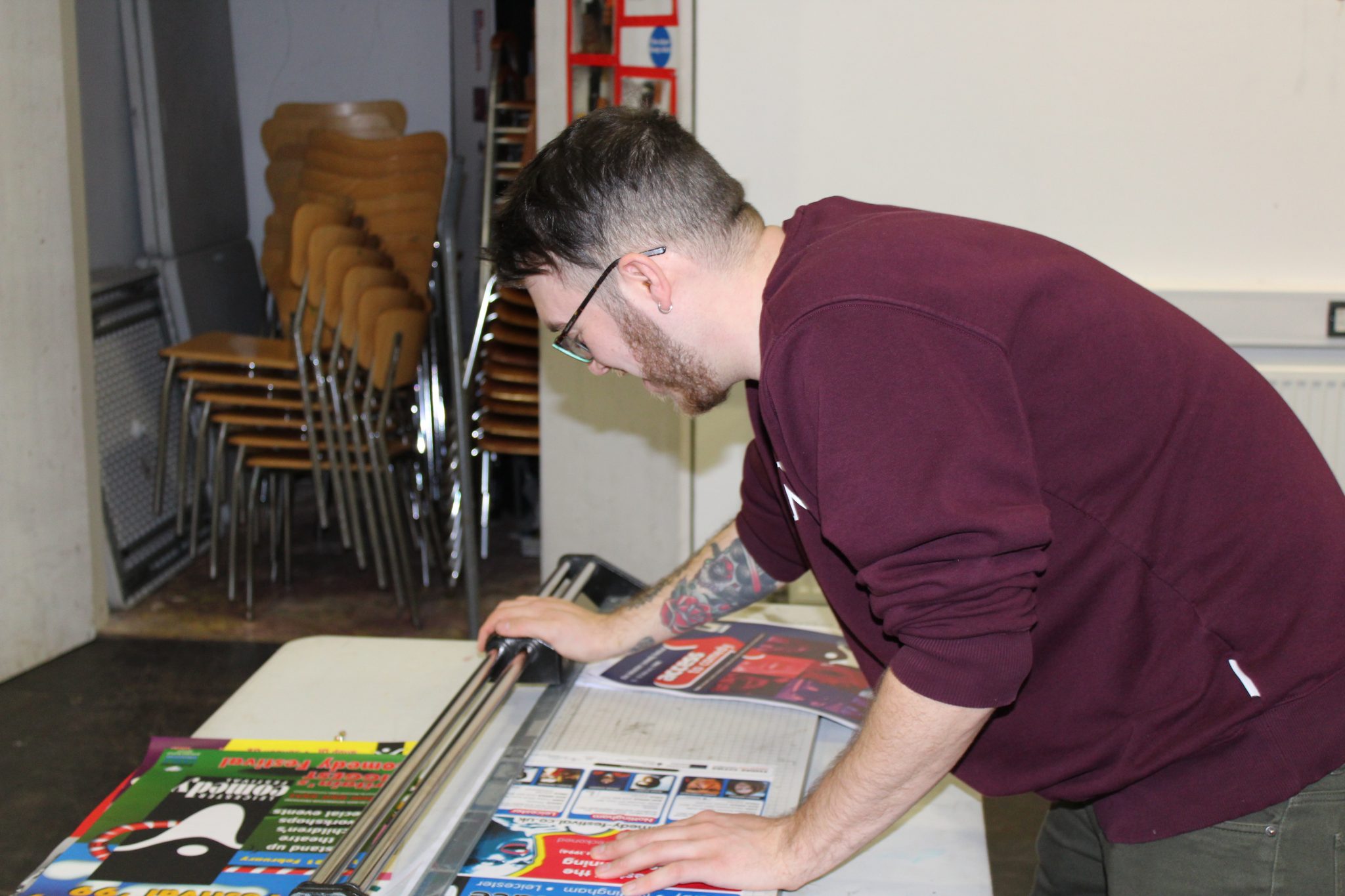 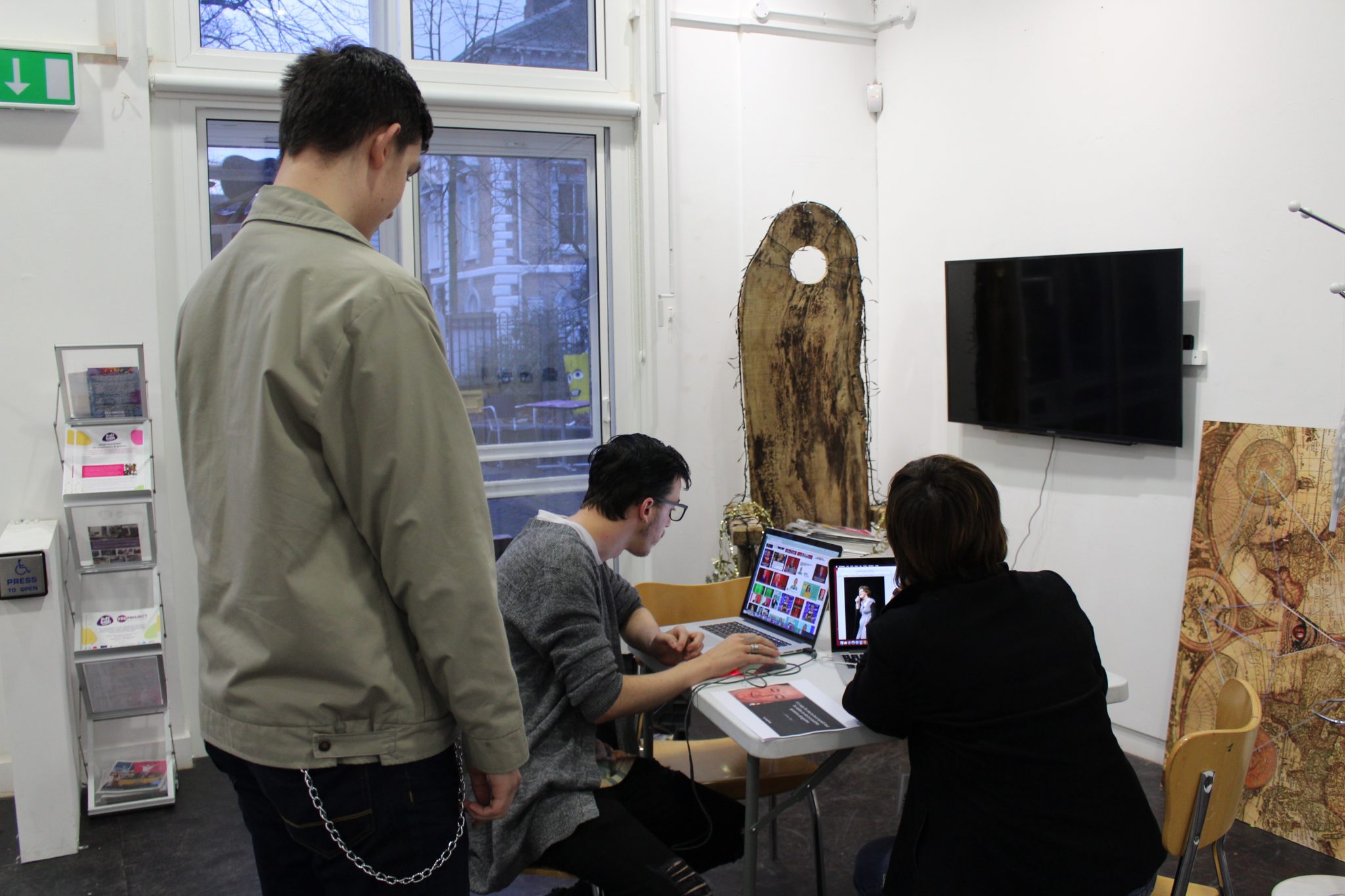 ALL THE STAFF AT BIG DIFFERENCE COMPANY

ANNA’S DMU STUDENTS: LIAM, HANNAH, CHELSEA, NATISHA, who carried out research and went through archives for the 1st Project

We use cookies on our website to give you the most relevant experience by remembering your preferences and repeat visits. By clicking “Accept”, you consent to the use of ALL the cookies.
Do not sell my personal information.
Cookie SettingsAccept
Manage consent

This website uses cookies to improve your experience while you navigate through the website. Out of these, the cookies that are categorized as necessary are stored on your browser as they are essential for the working of basic functionalities of the website. We also use third-party cookies that help us analyze and understand how you use this website. These cookies will be stored in your browser only with your consent. You also have the option to opt-out of these cookies. But opting out of some of these cookies may affect your browsing experience.
Necessary Always Enabled
Necessary cookies are absolutely essential for the website to function properly. These cookies ensure basic functionalities and security features of the website, anonymously.
Functional
Functional cookies help to perform certain functionalities like sharing the content of the website on social media platforms, collect feedbacks, and other third-party features.
Performance
Performance cookies are used to understand and analyze the key performance indexes of the website which helps in delivering a better user experience for the visitors.
Analytics
Analytical cookies are used to understand how visitors interact with the website. These cookies help provide information on metrics the number of visitors, bounce rate, traffic source, etc.
Advertisement
Advertisement cookies are used to provide visitors with relevant ads and marketing campaigns. These cookies track visitors across websites and collect information to provide customized ads.
Others
Other uncategorized cookies are those that are being analyzed and have not been classified into a category as yet.
SAVE & ACCEPT